from the Coast of light to Sherry wine

Cádiz is the oldest city in Western Europe. Founded by the Phoenicians more than 3,000 years ago. Gadir (AKA Cádiz) was the beginning of a city that has been inhabited from the very beginning. The province Cádiz is the proud birthplace of the internationally admired flamenco artists Camarón de La Isla, the voice, and Paco de Lucía, the guitar. Both protagonists of the flamenco revolution of the 20th century!

If someone says the name Jerez, before thinking about a city, many people think about Sherry wine! And that is absolutely right since the delicious sherry wine comes from this region. When visiting the city of Jerez de la Frontera don’t forget to try not only the Sherry wine but also enjoy the many local traditions.

In fact, one amazing piece of data about Cádiz is that as small as it is, it covers centuries of history. All mixed, without order or shame. Sharing stories in every corner and hiding others that only curious people will know.

The medieval village is the oldest quarter in Europe. A walled area where you can currently find buildings from the 1st century BC to wonderful pieces from neoclassical architecture. Nowadays it is the artisan and carnival zone, where you can have a lovely time sitting in some of the tapas bars, watching life go by. The Cathedral of Cadiz is the last baroque Cathedral in Spain, being an example of an architecture for the American colonies. That’s why it is also called “The Cathedral of the Americas”. Half Baroque, half Neoclassical, this building has a special crypt where you can hear the waves of the ocean.

The legend says that there is another Cádiz underwater!

To experience a more personal and intimate Cádiz, the more real one, from a local point of view. Finally ending at the central market, where you can have some local tapas and drinks. There is no better way to end a magical walk than by trying local products.

Essential Jerez, a city of traditions

The biggest city of Cádiz province, being the 5th biggest in Andalusia. With a big Arabic influence, still having a very well preserved Alcazar and mosque. Jerez is also the place where the sherry wine was born 3000 years ago.

The Alcazar of Jerez is one of the most important monuments of the city, and the oldest one. Built-in the 12th century by the Arabs. Very well preserved, you could imagine how life was during that period. It includes the last mosque still standing in Jerez. The Cathedral is a beautiful gothic temple built on top of the biggest mosque in Jerez in the 13th century. It is very rich in its decoration inside and has a spectacular principal facade.

The labyrinthine streets of Jerez demonstrate the Jewish and Arabic past of this city. You just have to go for a walk and let the city do the rest. We will have a nice break in a Tabanco in the middle of the tour.

the Coast of the light

The province of Cádiz is known as the Coast of the light. Because we are lucky to enjoy around 300 days of sunlight a year!

If you want to see the province in a different light. And moreover, you want to enjoy a beach day, looking at 281 kilometres of clean water and white sand, this is your tour! We will visit some of the best beaches in Spain and some of the most beautiful villages in the country, like Vejer de la Frontera, a small village with an Arabic essence.

White villages, the history of Al-Andalus

An essential experience if you want to know the history of Al-Andalus. Beautiful little villages on top of mountains, in different points of the natural park of Grazalema with breathtaking views and hidden stories.

On your trip to Andalusia, you cannot miss the White Villages! Named after the white lime of their walls that contrast with the nature that surrounds them. This entire area was a site of human settlements for 250,000 years, since prehistory. Therefore you’ll find many traces from the Iberians, Romans, Visigoths and the Arabs. This influence is easy to recognize as we walk through narrow and winding streets and steep slopes, which reveal fantastic corners.

more ideas in the area…

Flamenco in a Tabanco (evening experience) – Tabanco is a typical bar in Jerez, that mixes the social concept of the tavern and the commercial one of the wine cellar.

Sherry Wine Tasting and visit of a cellar with an expert. These wineries are so important to southern Spain traditions, that even the Black Bull so many people see as a Spanish symbol, is actually the symbol of the Osbourne winery (look out for the Bull when travelling through the highways south of Madrid- and you might also see the Tio Pepe symbol, which is a bottle with a hat and a guitar). For the wine lovers, we would be delighted to organize a visit to one of our favourite sherry wineries, with a wine tasting off course.  There is a big variety of Sherry wines- from the very dry, strong, nutty flavour, to the sweet, mahogany colour, delicate flavour.

Cádiz or Jerez are walking distance city centers, to be discovered in a 3h30 walking tour each. Easily combined. Ask for the possibilities.

MORE EXPERIENCES NEAR CÁDIZ AND JEREZ 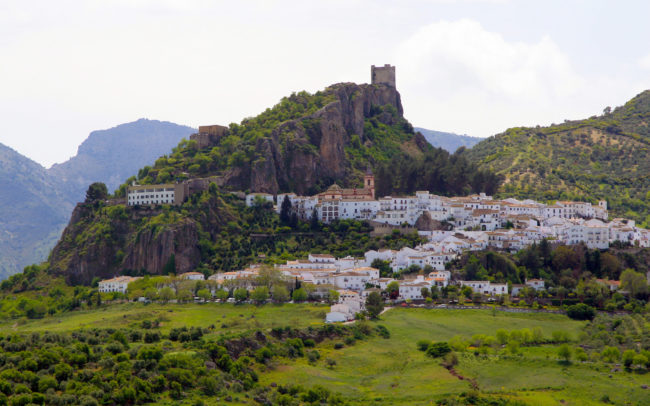 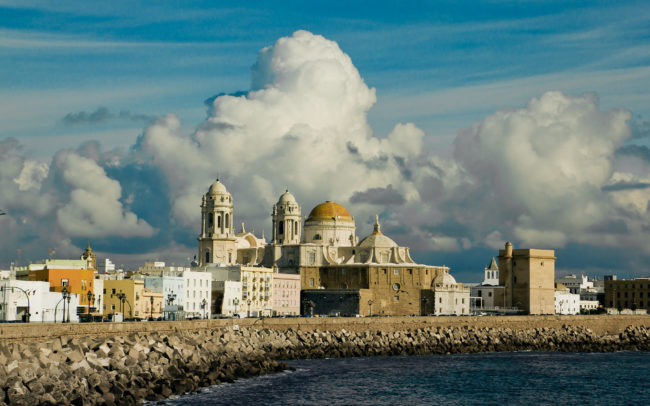 Cádiz, view of the Cathedral
0 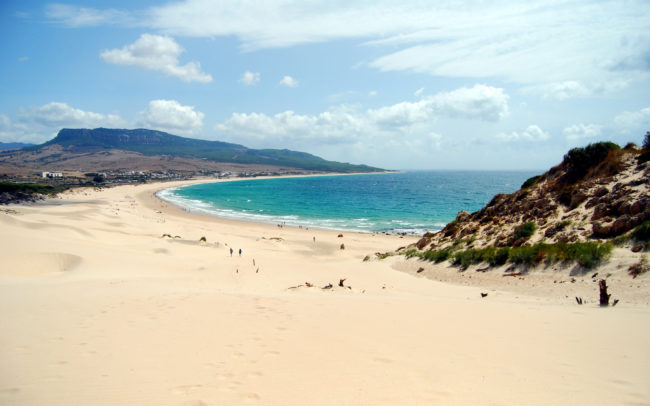