Bilbao, Bilbo, Botxo, the Basque Country capital city it has been able to renew itself with modern interventions and careful urban planning and has earned the “Lee Kuan Yew World City Prize”, awarded by the city-state of Singapore in collaboration with the Swedish Nobel Academy and which is considered the Nobel Prize of urbanism. Meet Botxo affectionately name of the old town of Bilbao, a historic city with a great industrial mining background and delve into modern and contemporary art through the visit of the Guggenheim Museum Bilbao.

Located in a strategic enclave, surrounded by a fertile landscape, with forests, mountains, beaches and steep coasts, with a privileged cultural offer (art galleries, museums, exhibitions, etc.) and gastronomy made up of prestigious restaurants and taverns, this is Bilbao (El Botxo). Ambling through the old town of Bilbao to immerse in the urbanism and architecture marvels;  the Mercado de la Ribera, Plaza Nueva, the Arriaga Theater in neo-baroque style, not far the Bilbao Cathedral  is a XIVth century gothic temple or the Church of San Nicolás in baroque style are some of the city great religious buildings.

Walking beside the Nervión river you will find the Zubizuri bridge of the Valencian architect Santiago Calatrava, the Iberdrola Tower designed by the Argentinian architect César Pelli, and one of our favorites, the Euskalduna Conference Centre and Concert Hall of the Japanese architect Arata Isozaki, within many other beautiful buildings, bridges, and art pieces like the Puppy and Tulipes of Jeff Koons, the huge spider Maman designed by Louise Bourgeois, and the outstanding Graffiti on the La Salve bridge. Above all, it stands out the Guggenheim!

Continuing on foot along the riverside, contemplating its avant-garde buildings, bridges and sculptures, the Guggenheim Museum, Bilbao will appear in its unique extravagant shape. The Canadian-American Frank Gehry is the architect of this magnificent example of the most avant-garde architecture of the 20th century. With a surface area of ​​24,000 m2, of which 9,000 m2 are intended for exhibition space, the building represents an architectural landmark due to its bold configuration and innovative design, forming a seductive backdrop for the art exhibited there. All together, Gehry’s design creates a spectacular, sculptural structure perfectly integrated into the urban fabric of Bilbao and its surroundings. We will be able to explore the exceptional permanent collection as well as the architecture of the museum. 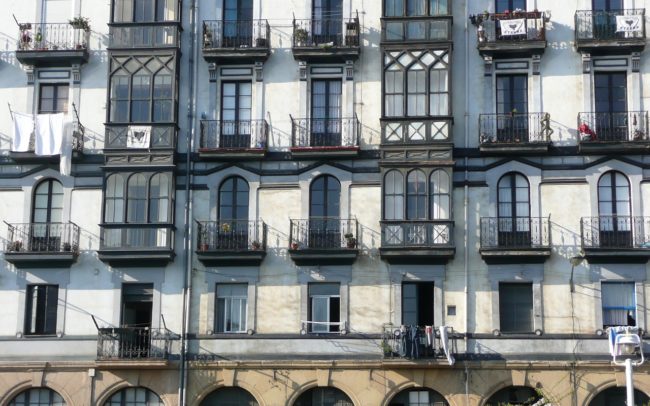