The North Atlantic coast of Spain is often passed by on the way to Santiago de Compostela in Galicia or visited only in the Basque Country area, which is often considered to be the only part of Northern Spain worth visiting. Well, here is a statement: these two small regions roughly between the Cordillera Cantábrica and the Atlantic Ocean are not only dense with natural wonders and incredible food but are also beautifully green, with impressive cliffs along the coast (that, honestly, sometimes seems to be in Scotland! – saving the distance, of course). Asturias and Cantabria are also lands where you can admire the simple and austere pre-romanesque architecture. Rare and unique examples can be found across all of the regions. Here are some travel ideas!

Let’s start with Cantabria’s capital, Santander. Although it’s not the most charming place, it is a very lively city where many Spaniards spend summer and also a great spot for family holidays.

Comillas, not far from Santander, is a surprising town with one of only three buildings designed by the Catalan architect Antoni Gaudí outside of Catalonia (known mostly for his works in Barcelona such as La Sagrada Familia). El Capricho was built as a summer home but the owner died before having a chance to enjoy it – quite the tragedy. And this is not the only spot worth visiting in Comillas – check its beaches out!

Santillana del Mar is a well preserved medieval town full of cobbled-stone streets, quaint balconies and plazas. Nearby you’ll be at THE place where some of the most incredible and ancient paintings were made by humans – 13.000 to 35.000 year-old-paintings! The original paintings at Cueva de Altamira are so fragile that replicas were made in order to appreciate them. Visiting them provides an interesting perspective on the history of humanity!

Talking about history, all of the north of the Iberian Peninsula is crossed by variations of Camino de Santiago, the pilgrimage Way of Saint James. Camino de la Costa o del Norte literally “the way of the coast or of the north”, follows all the northern coast. You don’t need to follow all the Camino, but some parts here and there offer incredible hikes and astonishing views! The Camino Primitivo starts in Oviedo, which by the way is the capital of Navarra, it is said to be the oldest of the pilgrimage ways.

As much as Cantabria’s natural wonders could cover the entire page, let’s talk about what Asturias offers to travellers! For starters is where nearly 90% of all the cider produced in Spain comes from! To fully appreciate the extent of both crafts, to serve cider and to drink it in, you’ll have to visit one -or two- sidrerías (cider-bar).

For nature lovers and mountain hikers, Picos de Europa is a range of rocky mountains (2000 mts.) shared among Cantabria, Asturias and Castilla y León. A good starting point is Fuente Dé where a cable car brings you to a higher spot. Don’t do this if you suffer from a fear of heights! Another start point is Bulnes, which has a rather expensive, but necessary funicular if you want to skip a few kilometres of hiking!

In terms of history and art Navarra is interesting too: the only area in the whole Iberian peninsula never occupied by the Muslims. Therefore, the Asturian people claim that their land is the origin of Spain and the rest is just conquered land. Which in some ways it is! It was in Covadonga, 1300 years ago (circa 722) where Pelayo, a Visigothic noble, soon to become king, lead the first Muslim defeat during their occupation of the Iberian Peninsula!

Gijón is a double hearted city: young, active, proactive and ancient, settled and with deep roots! Cimadevila is the old fisherman’s quarter, the ancient heart of the city and the south of the city is where the young people party – especially in summer!

Finally, let us tell you that if you love nature and great food, Asturias and Cantabria are the perfect places to travel to! With the Cantabrian mountains and the Cantabrian Sea, the key features of these northern regions are their geography. Rugged coastal cliffs and the mountainous interior with vast greenery and lush vegetation. There are many National Parks to enjoy and on the extensive coastline, you will find caves and beautiful beaches. Its colder climate is also a wonderful excuse to try their local cuisine, rich in different beans, sausages and meat or cheese. There is one town that you can smell even a mile before you arrive. And it is not a bad smell. Once you get there you learn that they produce a type of blue cheese named after the town, Cabrales. It can be found all over the town, just like the smell!

Between Asturias, Cantabria and Castilla y León, at Parque Natural de Somiedo. The Fundación Oso Pardo takes good care of the protection of this wild animal, a native of the Cordillera Cantábrica, that, even if scary, has been at real risk of extinction.

Santander and Gijón being the main towns are two great locations to establish a base camp from where explore the area with day excursions. More rural tourism experiences can be found throughout the Cordillera Cantabrica. Most day trips will be necessary to use private car. Hicking treks are highly recommended in the mountains. 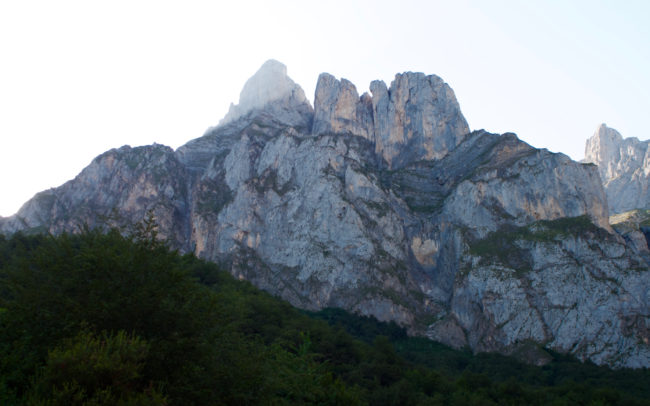