To visit all the museums in Madrid you would probably need decades, so here we propose a selection of some of our favourites.

Guide’s choice of masterpieces. A glimpse of the world’s Art History through one of the most stunning art collections in the world.

The Prado Museum is, without a doubt, a mandatory stop when visiting Madrid. Within the walls of this 201-year-old Museum are exhibited some of the masterpieces that we have all seen in our art books. Impossible not to get excited at the “Descent” of Van der Weyden and the wonderful blue tunic of the Virgin; how not to be surprised by pictures that “move”; how not to be anguished by Goya‘s disturbing “El Perro Semihundido” and, of course, wonder, like millions of visitors previously, what was Velázquez really painting in the prodigious “Las Meninas”.

The Museum Reina Sofia takes us on a journey from 19th to 21st-century art.

Essential dive in contemporary Art.  Known simply as “El Reina” (the Queen) it is indeed the monarch of contemporary art in Spain, one of the most visited in the world of its kind and partly because it is home to the world-famous “El Guernica” by Picasso.

Its main axis is Pablo Picasso. The birth of this genius, 1881, is the timeline that separates the Prado Museum from the Reina Sofía Museum.  Practically the entire building (which used to be a hospital) revolves around the room where one of the most influential works of art of the 20th century is exhibited: the Guernica.  The Guernica, a symbolic mural which deals with the bombing of the city of Guernica during the Spanish Civil War. This mural can be seen as an authentic, more than 3 metres high book.

Accompanying Picasso and some of his most universal works, we will also find other great and famous Spanish painters such as Dalí and some of his most disturbing paintings, Joan Miró and his surrealism, and many other masterpieces that define the art of our life, of our time.

The biggest Royal Palace in Europe: an obligatory visit while in Madrid.

Everything that surrounds this impressive building, which is over 280 years old, is memorable: its location, with splendid views of the Casa de Campo (the old hunting ground of the kings); his Stradivarius collection (unique in the world); the royal armoury (with armours for infants and pets, among others); the throne room; the crown (which the king never wears on his head); rooms with original decorations… We can almost feel, first-hand, how the different royal families have lived since its construction at the end of the 18th century.

The greatest Spanish palace behind the fortress.

The Monastery of San Lorenzo de El Escorial was traditionally considered an eighth wonder of the world. This is no surprise since it brings together, in a unique setting – at the Sierra de Guadarrama National Park-, an impressive enclosure that, following the detailed wishes of the most powerful king of the time, Philip II, a royal palace, the Royal Pantheon, a monastery full of works of art, a basilica of gigantic proportions and the library of outstanding beauty and with a great collection. All the knowledge and art of the 16th century in El Escorial and just half an hour from the capital, Madrid.

Tyssen-Bornemisza National Museum: roughly 1.600 paintings,  once the second-largest private collection in the world. It is a collection of masterpieces of fine art and somehow fills some gaps at El Prado and El Reina Sofia. The 3 museums create a “golden triangle of art” in the centre of Madrid.

Museo Sorolla: the best collection of the artist works in what was his last years home and studio.

Matadero Madrid: centre of contemporany art. Temporary exhibitions and events all year round.

Most cultural centres have temporary exhibitions. Ask us which type of museum do you like to visit and which kind of visit you enjoy the most! Madrid has lots to offer.

2-hour walking tour inside each museum. 3-hour tour if we pick you up at your hotel. Each tour is a guide’s choice of masterpieces, it can be adapted to your particular interest.

El Escorial: 4 hours guided tour, with public bus and train or a private vehicle (subject to time in case of traffic).

Prado Museum: The Garden of the Early Delights (Bosch); The Descend of the Cross (Van der Weyden); The Annunciation (Fra Angelico); The 3 Graces (Rubens); Charles V at Mulhberg Battle (Titian); The lavatory (Tintoretto); The Second of May 1808 and The Third of May 1808 (Goya); Las Meninas (Velazquez).

The Royal Palace visit of the inside.

Madrid: Bernabeu with a hardcore fan

Toledo: Muslims, Jews and Christians. The mix of Spain 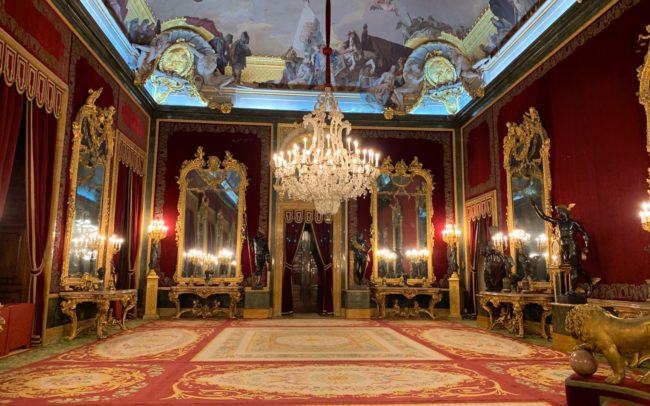