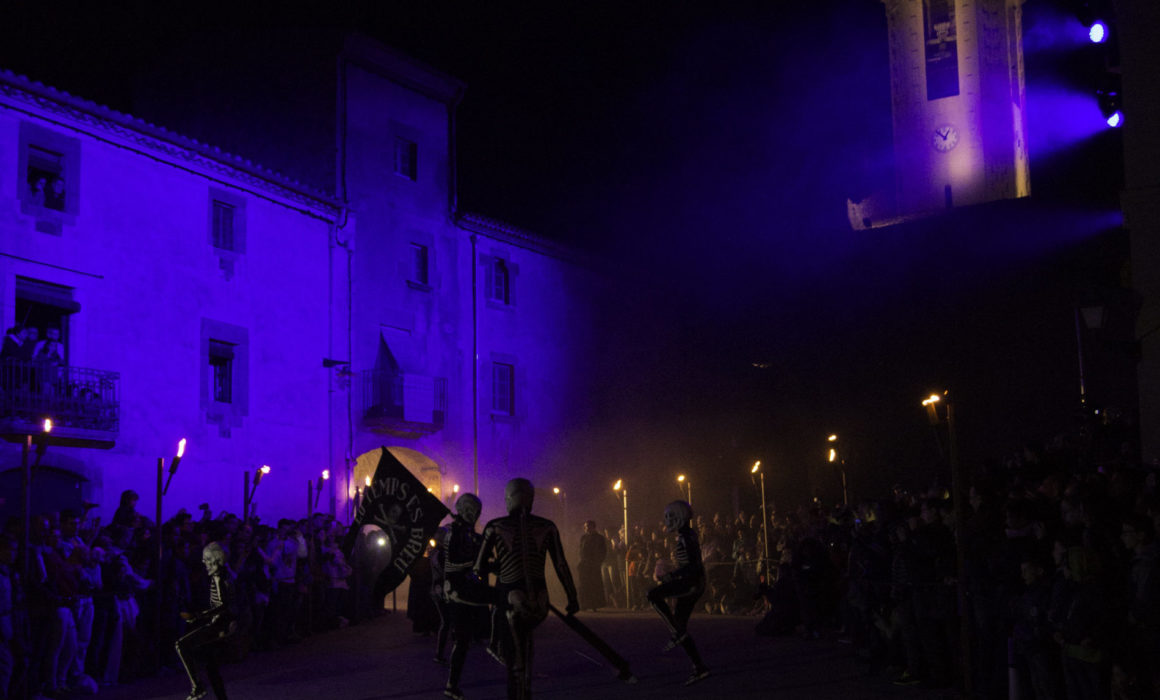 World Heritage by UNESCO in 2010 and internationally known as human towers represent the strength, unity and balance of the Catalans. They have their origins in the 18th century in the south of Catalonia although nowadays there are “colles de Castellers” almost everywhere.   Normally we can enjoy their performances in the squares of villages and cities during the main festivities and the main meeting takes place during the festivity of Sta. Tecla, the patron saint of Tarragona, where the best “colles de Castellers” formed by men, women and children of all ages compete by setting up the most incredible human towers.

Following the ancestral tradition to celebrate the summer solstice, the “Revetlla de St. Joan” is probably the most important night party after New Year’s Eve.   Runner volunteers bring a flame from the top of the mountain of El Canigó in the Pyrenees in order to light all the bonfires on the night of the 23rd of June throughout the Catalan speaking territories which were part of the former Crown of Aragon.   On the night of the fire, you will hear the firecrackers all night long and everything that deserves to be burnt so as not to bother the future goes on the bonfires. Friends and families come together celebrating the shortest night of the year eating a cake called “coca” and drinking cava. It’s a  magic and noisy night with open-air parties and concerts in the streets, squares and beaches.  It’s the summer solstice and lucky for everyone, the next day is a bank holiday.

St. Jordi, the day of the rose and the book

Probably one of the most beautiful days in Catalonia is the 23 of April, when the celebration of the main patron saint, St. Jordi, takes place. According to legend, St. Jordi killed a dragon to save a princess and gave her a red rose that grew up from the blood of the beast. It is our St. Valentine’s day.   On the 23rd of April, William Shakespeare, Miguel de Cervantes and Josep Pla died, therefore, it’s the day of literature as well, so you can see rivers of people in the crowded streets bringing roses and buying books.   On that day book shops and florists set up on the streets and in the main cities writers are signing their books. It is simply an amazing day! Celebrated throughout Catalonia the main meeting point that day is Les Rambles in Barcelona, so if you prefer to avoid the crowds, better stay away from this lively street, or go very early in the morning.

11th of September, the national day of Catalonia

The national day of Catalonia, far from being a celebration it is the commemoration of the assault of Barcelona by the Bourbonic troops on the 11th of September 1714 after a hard siege.  This assault supposedly ended the War of the Spanish Succession and the end of the Catalan  Courts. Usually, in the morning there are flower offerings in representative points and in the evening large demonstrations in favour of independence take place.

In summer, around the 15th of August, a lot of villages in Catalonia celebrate the main festivity.  In Barcelona, the most famous festivity besides the celebration of the patron saint La Mercè takes place in the charming neighbourhood of Gràcia which still preserves the taste of a village.  The neighbours of several streets work together all year long developing a theme to decorate their streets with handmade and recycled materials. During the week, the whole city enjoys activities designed for all ages during the day and concerts in the streets at night. Just when “Les Festes de Gràcia” finishes, if you need more, it’s time for “Les Festes de  Sants”. It’s maybe a smaller version but it retains the same concept and spirit.

The Patum of Berga

The quiet, small city of Berga is completely transformed during Corpus Christi for five days when thousands of visitors come to celebrate “La Patum”, a medieval tradition recognized by  UNESCO since 2005.   The villagers participate in the representation of the main events as medieval characters in theatrical performances, playing traditional music or dancing with fire.  La Patum is celebrated with solemn activities in the morning and with a festive mood at night when the most anticipated moment occurs, the Plens. Els Plens are fire devils that dance to the rhythm of drum music and a melody composed in the XIX century, transforming Berga into a hell of fire and party.

During one week in May, the centre of the old town of Girona changes completely when decorated with flowers. Visitors from everywhere enjoy original flower creations in gardens,  courtyards, monuments and even on the steps of the cathedral.

Despite an increasing number of citizens who declare themselves as not religious, many catholic traditions are still standing and linked with social life, gastronomy or even theatre representations all year long. During Easter, traditional masses and religious processions are celebrated everywhere. One of the most impressive representations is “The dance of the death” in the small village of Verges, where at night during a procession, a skeleton dances while marking your death time (top image).   Theatrical performances of the passion of Christ take place in villages like Olesa de  Montserrat or Esparreguera, and in Barcelona, the façade of the Sagrada Família that represents the Passion of Jesus is lit with special illumination.   The sweetest moment is on Easter Sunday and Monday when children eat a special chocolate cake called “Mona” given by the godparents.

Around two weeks before Christmas, around 13th December,  we can buy all the traditional elements to prepare  Christmas in “La Fira de Sta. Llúcia”. In about 200 small stalls in front of the cathedral of Barcelona, you can find Christmas trees, nativities, Christmas lights and more.

According to legend Barcelona‘s former patron saint Sta. Eulàlia was substituted by “La Mercè” in the XVIII century and that is probably why every year during the celebration of the current patron saint of the city, La Mercè, it rains a lot like some sort of revenge.   From the 24th of September and for one week, there are activities for all ages all day long everywhere in the city and at night there are concerts in the main squares. Castellers, traditional dances, a massive running race and the spectacular fireworks on Montjuïc are just some of the hundreds of activities that thousands of people enjoy in the streets. 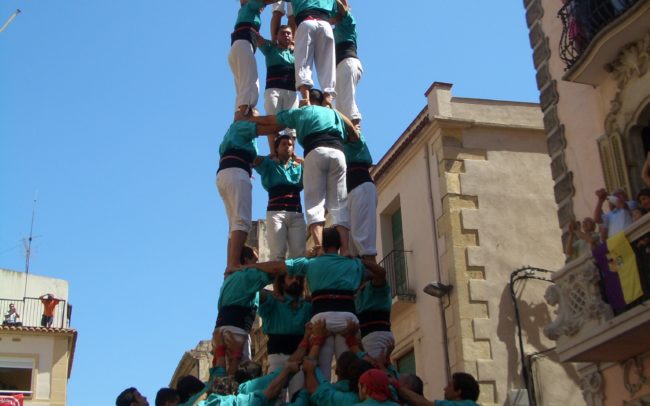 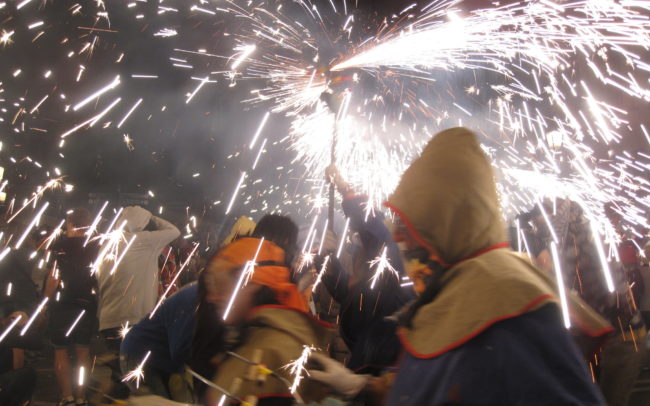